Oh my head. It has been completely done in by all of this fuss about Ms Rowling’s latest book. All because people cannot accept the use of a pseudonym and are suspicious of how the whole situation came about!

The Case of the Secret Celebrity

For those unaware, the news broke last week that J K Rowling had used a pseudonym to write a crime novel, which was published to fairly modern success back in April. ‘The Cookoo’s Calling’ is a novel about a Private Investigator called Cormoran Strike, and his investigation of the suicide of a supermodel whom her family believes did not kill herself. Somehow word got out that the real author was actually JK and not Mr Robert Galbraith, and sales exploded. Cue the moaning. 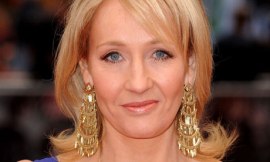 Rowling, known for her immensely popular children’s book series, Harry Potter, has come in for a lot of criticism over the years. When success came her way, people spoke up about how they thought she wasn’t a very good writer and how she ‘stole’ ideas from other series. Then when the Potter books came to an end, there was endless buzz about her first book for adults – The Casual Vacancy, a novel of politics, bitchiness and class war in village life, which was met with rather mixed reviews. Again, she was dogged by criticism of her writing ability and her sales credited to her celebrity rather than her talent.

I completely understand why, after all that, JK wanted to get away from her own name and write something to prove she could write. Crime is a huge genre which is difficult to get into. Your novels must be full of detail, mystery and characters who can realistically get involved in solving the crime at hand. They can be gruesome, they can be scary, but they must keep the suspense going and keep the reader guessing.

Reaction to the ‘Debut’ Author.

It appeared like JK had managed it though. Looking through amazon reviews before the leak, people were thoroughly enjoying the book. The lowest rating I could find was a 3 star review, written on May 25th 2013, stating that the book was “okay, but slow” and would have benefited from better editing. (book lover from California, on amazon.co.uk)
A majority of the reviews were rated at 4 and 5 stars, with glowing praise being heaped on ‘Mr Galbraith’.
Just some of the praise found in the earlier reviews:

“[…]very well-written and engrossing read and promises to be the start of a very good series.”
Sid Nuncius
(amazon.co.uk)
4th July 2013

“One of the things that really set this book apart for me in the crowded genre of private investigator fiction was the quality of writing, depth of character and the wonderful sense of place Galbraith brings to the novel. Galbraith’s vivid descriptions bring the story to life and we feel like we are there with Strike and his temporary secretary Robin as they solve the mystery. I suppose I would describe this as quite an old-fashioned style thriller with an emphasis placed on interviewing witnesses and gathering clues rather than action and this really helped with the character development.”
S. Morris
(amazon.co.uk)
23rd April 2013

” On the surface it seems straightforward, unexceptional and unambitious, everything fits the established conventions, there’s nothing immediately new that stands out, and yet it’s an utterly compelling read with strong characters that wraps you up completely and thrillingly into the investigation.”
Keris Nine
(amazon.co.uk)
15th April 2013

Since JK was ‘outed’ the reviews have been more about her authorship and the fact she lied, more comparisons with her other series and general negativity towards a woman who people seem to think has earned her money from writing and so should just stop. Accusations are thrown about that this was all a big publicity stunt to boost sales.

The truth is, JK didn’t want to be outed as Robert Galbraith. She has said she wanted to write without the glare of the spotlight and get some real feedback on her writing. After finding writing under a pseudonym “a liberating experience”, JK admits that she now feels angry at those who leaked her secret.

So who let it slip?

Was it the publishers wanting a sales boost? After all she only sold 1500-2000 copies initially – great for a debut, but not so great when you have one of the world’s most popular authors on your books.

Surprisingly, no. It was in fact a law firm who let slip. Russell’s Solicitors to be precise.  One of their solicitors told his wife’s friend and she then blabbed to the Daily Mail newspaper via twitter ( see the BBC  and London Evening Standard articles), but it appears the timing is just too convenient, as one literary agent pointed out it comes at the start of the summer holidays (perfect for sales for beach reading) and just before Rowling’s previous book, The Casual Vacancy comes out in paperback.

Unfortunately a lot of people are annoyed by the fact that the author was not upfront. And that since the leak sales have shot up and the book is now a best seller which Waterstones were sold out of at one point. And that it was getting so much press attention.

The scepticism about whether the leak was orchestrated led to many people criticising the author. I heard some people say she is greedy since she already has all those millions from Harry Potter.  Is it so hard to understand that some people write for the enjoyment of writing, and not for money?
Many people forget that pseudonyms are the norm in the publishing industry. from the Bronte Sisters pretending to be the Bell brothers, to Stephen King’s Richard Bachman sob story. yet I read facebook comments from people who couldn’t believe she lied.

In fact, in my annoyance I went on a post from audible.co.uk’s facebook page and countered a lot of the moaning in a post which seemed to have rubbed people up the wrong way. I suppose it is because I used a list. And my irritation does come across. Still, I can’t help but feel that the person who replied to me was a troll. She posted replies to many others being sarcastic about me, so either she is a troll or she is a really bitter person!
Me too obviously, as I am showing the convo here! What do you think? Do I sound condescending? 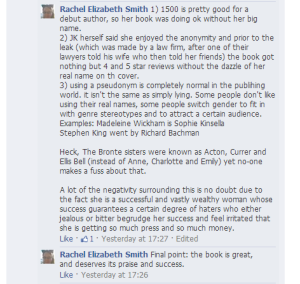 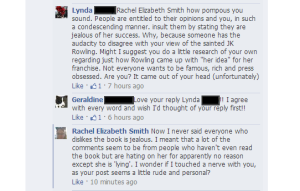 I am not a huge JK Rowling fan. I just enjoy reading books. I found her books to be entertaining and from what I have seen and heard from JK, she is a very nice person who is intimidated by her fame but who genuinely enjoys writing. She has been improving her writing over the years and though I’ll admit she isn’t the greatest writer, she isn’t the worst!
I genuinely believe there are some people out there who hate her because of her success. There will always be those who dislike her as they feel she is not a good writer, but then there are those who use that as an excuse. I mean, why hate someone because they have had success in writing badly, unless you are jealous of that success?

I personally dislike Stephanie Meyer and E L James because they have had success with terrible novels and I am so jealous! (And also sad that they are encouraging impressionable women to idolise sexist, abusive men, but that is another rant!)

This topic irritates me so much I am even losing my cool writing this post! I just feel I should sum this up by saying that the whole situation has been blown out of proportion, people are hating on JK for seemingly no reason, and having actually read The Cuckoo’s Calling, I must say the book does deserve success. It is fantastic and I will be penning a review very soon! (without ranting. I promise.)

7 thoughts on “J. K Rowling and the Great Scandal of the Pseudonym”